Western Implementation of Meditation for Stress Reduction Skip to content 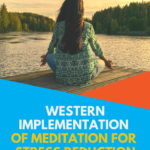 Today’s society is filled with stresses. Western civilizations places tremendous stresses on their inhabitants, in order to fulfill many mundane tasks, such as working a job, maintaining a family and keep themselves in good stature. This can cause a great deal of mental anguish, which can be very detrimental to an individual’s psyche. Therefore, it is imperative for these individuals to seek out methods and techniques for reducing stress. In western countries, many have turned to ancient techniques. Below, you will find an in-depth overview of the practices of meditation in the western world, as well as a brief history of these techniques.

Although the middle easterners adopted meditation many ages ago, western civilization began to pick up on it in the mid-20th century. Buddhism continued to pave the way for meditation, as it is a very important part of the Buddhist’s lifestyle and religion. Many psychologists and psychotherapist encourage their patients to adapt the technique, so they can reap its many benefits. It still ranks very high among Americans, as a resource for reducing stress. Once you become familiar with the practice, you will easily be able to meditate at any time of the day, which will help you reduce your stress level and allow you to relax.

The Influence of Numerous Studies

If there is one thing that remains true about Americans, it is that these individuals strongly believe in the power of science. When a subject is continuously studied and researched, these people strongly rely on the outcome of these studies. Well, meditation has been repeatedly studied in the United States. Unsurprisingly, the studies have determined that the techniques can be used to help provide immeasurable benefits to those that practice.

The University of Wisconsin-Madison studied meditation. The research concluded that individuals, who practice mindfulness meditation, are able to avoid common colds. Other studies suggested that partaking in an eight-week meditation program could actually cause a permanent change in the brain. Of course, the most frequent studies have suggested that individuals, who practice and meditate, are capable of reducing their stress levels. A study, which was reported in the Health Psychology journal, concluded that appropriate meditation was capable of decreasing the level of the stress hormone cortisol.

The Influx of Mindfulness Meditation

Although many forms of meditation have become increasingly popular in America, it is the mindfulness meditation, which is leading the charge. During this type of practice, the individual sits in a quiet location and focuses on their breathing. While the individual is at peace, they’re encouraged to focus on the present, while ignoring the concerns of the past, ridding their thoughts of shopping, movies, worries and any other distractions. The goal is to focus on one thing and one thing only, to clear the mind. This helps the individual reduce their stress levels. Of course, this isn’t some theory from a snake oil salesman. In fact, Johns Hopkins University researched approximately nineteen thousand meditation studies. With their findings, they were able to conclude that mindfulness meditation was capable of helping reduce anxiety, depression and even pain.

In the past few years, scientists and doctors have worked hand in hand, in order to research the benefits of mindfulness-based stress reduction, or MBSR. One clinical study attempted to use the meditation, as a therapy for acute cognitive impairment. A group of older adults ranging from 55 to 90 and suffering from cognitive impairment practiced MBSR for eight weeks. The study concluded that these individuals were able to improve their brain networks and were even able to retrieve memories more effectively. In fact, it was concluded that the practice helps to combat the effects of Alzheimer’s and could potentially help to slow the symptoms of the disease.

In another study, at Wake Forest Baptist, a professor of anatomy and neurobiology studied mindfulness meditation and its effects on pain and everyday anxiety. Individuals were put through twenty-minute sessions, in which they practiced the meditation. The patients, who participated in the study, were able to reduce their pain by near 40%. On the anxiety spectrum, the study showed that the participants believed their anxiety had reduced by 39%, after meditation.

Harvard University did an eight-week study, which focused on mindfulness meditation and the regions of the brain that are responsible for memory, empathy, and stress. Sixteen participants underwent a magnetic resonance imaging before and after the study.

Guided meditation practices were completely documented, which showed that the individuals participated in 27 minutes of mindfulness practice exercises daily. It was proven that the gray matter density was decreased, within the amygdala, along with a reported reduced stress levels, by the participants. There have been previous studies that have focused solely on meditation and the gray matter, within the brain and all results have shown some improvements in different parts of the brain including the insula and hippocampus. Neuroscientists have been in awe, with these amazing results especially in participants that exhibited anxiety and post-traumatic stress disorders.

All in all, there are some very promising forms of meditation. Westerns are leaning towards the benefits of mindfulness meditation. It is likely that other countries from all around the world will also follow