Why Not Try Out A New Pumpkin Protein Shake! Skip to content

If you follow these steps you’ll end up with a healthy and hopefully tasty way to get protein after a workout. As I said earlier, I have seen very many variations of these recipes so if you get curious or need some variety in your shakes, just try some experiments and see what happens, you never know you might love it!

As the weather starts to change, you should definitely continue you keep your fitness regimes in check, but with this change in weather, you should decide to start changing up your dietary variety! When you think of the foods in fall, what are some of the main foods you think of? To me, at least pumpkin is definitely high up on that list, and I’m sure it is for you also. And this brings us into one of the coolest protein shake flavors I have ever seen! Yep, I’m talking about a new pumpkin protein shake!

Fall Is Here and So Is The Pumpkin Protein Shake!

Now Optimum Nutrition and a few other providers have had either pumpkin protein powder or pumpkin pie protein shakes on their menu, but up until recently, I haven’t really tested the waters. Generally, I tended to stick to what people would consider the “Norm” with protein shakes and dietary meals, but I decided to step out of my comfort zone a little bit.

So, I decided to try out AI Sports, pumpkin pie protein shake. This is an exclusive flavor from AI that is only around during the fall months. AI’s release of this pumpkin pie protein powder is both groundbreaking and a little bit different than other protein powders in other ways than just this unique flavor. AI, decided to go with a no whey protein approach. With this new protein, they decided to make the protein aspect come from both rice and from peas. This is strangely different than other protein providers but it does come with some unique benefits. 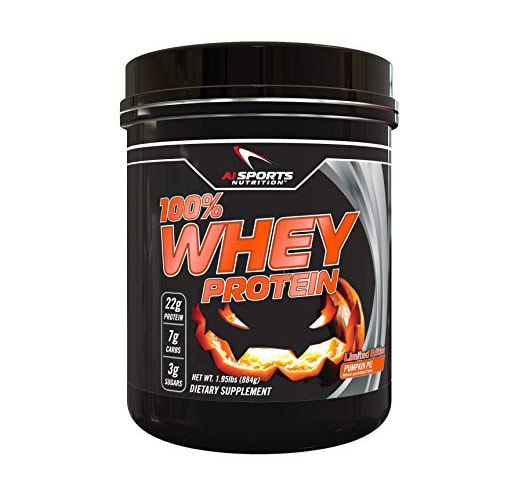 This new pumpkin protein still provides heaps of protein which is great, and it also has a much higher digestibility compared to whey protein. The rice and peas protein has a digestibility rate of up to 95%, which means that your body will be able to take in more of the protein and actually put it to work successfully. Along with this, multiple science reports have shown that rice and pea protein actually cuts up the fat enzymes in your body which makes it easier for your body to absorb, so they state that this protein has a slimming effect. So even if you don’t use the pumpkin flavor, just trying this new type of protein is something you should definitely try out, and who knows you may switch off from whey protein for good.

Along with all this pre-made pumpkin pie protein, you also can go with the Pinterest route and make your own with a pumpkin pie protein shake recipe. There are hundreds of variations to these recipes and I have seen some really unique and possibly very tasty recipes. I have seen pictures of a chocolate pumpkin protein shake could be a little too much flavor but it definitely sounds like something to try! Below I’m going to list a general pumpkin shake recipe. The cool thing about these recipes is that I have seen hundreds of different variations to each recipe, and each of these variations gives you a nice little bit of flair and creativity, and you should experiment so that you can find what suits your best! Also, these recipes don’t generally even use pumpkin protein powder, so you don’t have to worry about ordering that flavor from a special store or website if you don’t want to. Most use a general vanilla flavor, but then again I urge you to experiment with different flavors and let me know what’s the best, and I’ll give it a try! And a note to anyone who may or may not make regular visits to Starbucks, there have been rumors of pumpkin spice protein powder… So, feel free to jump on that!

I normally put this in a blender, but you can also put it in a shaker cup with smaller amounts.

To add extra flavor, try using some of these extra steps along with the steps above.

If you follow these steps you’ll end up with a healthy and hopefully tasty way to get protein after a workout. As I said earlier, I have seen very many variations of these recipes so if you get curious or need some variety in your shakes, just try some experiments and see what happens, you never know you might love it!