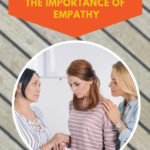 Humans are absolutely capable of unimaginable cruelty. That vicious nature knows no bounds, and people result to criticizing, insulting, bullying, assaulting, killing, and torturing each other and more. How much of this horrible behavior would the perpetrators like to have visited upon themselves?

And yet it continues to happen on a daily basis. This selfishness and total disregard for others seems to be growing. People continually justify their actions based upon their own small view of the world, and never stop to consider that there may be something wrong with their approach to life. What is the chief cause of this societal distress? The diminishment of empathy in our society.

Empathy is defined as “the ability to understand and share the feelings of another person”.  This is a fairly broad definition, and can be used to describe a wide range of experiences. Researchers in the field have endeavored to divide this general definition between two different types of empathy: Cognitive and Affective.

Cognitive empathy can also be described as perspective-taking, and it references our capacity to understand and identify the specific emotions of others. People with Autism have a particularly difficult time with this specific empathetic type. Affective empathy references our ability to experience the feelings or sensations that are typically triggered in response to the emotions of other people. In particular, this type of empathy is evidenced in one of two ways. The first way involves the appearance of a feeling of stress in response to the fear or anxiety of another person. The second way to demonstrate affective empathy is to mirror the other person’s emotion back to them.

From a less technical standpoint, empathy is simply the ability to understand another person’s point of view. That understanding is the foundation of communication, respect, and morality.

What is the importance of empathy?

Empathy has been called “the building block of morality. This relates directly back to the Golden Rule, or the ethic of reciprocity. This rule can be explained from many different perspectives, and in all cases it is defined in one of the following ways:

Psychologically, empathy is required to exercise either of these rules. For, if you cannot identify the effect of your actions on the emotions and psyche of another, then you also are not equipped to process the feedback necessary to alter your behavior. This directly affects your ability to have deep and engaging relationships with the people in your life, and emphasizes the role of empathy in affecting the quality of your long-term relationships.

In general then, a person who lacks empathy will find difficulty in the creation of strong relationships with their spouse or family. They’ll never know that stronger bonds can exist, that deeper levels of understanding are available, or that the key to communication is the very thing they lack. That is, unless they’re taught to do so. That brings us to our next question:

Can empathy be taught?

In the Journal of Personality and Social Psychology, a group of researchers sought to determine the outcome of practicing affective empathy in the context of racism. They created an example of empathy by having participants watch a five-minute video. In it they showed the experiences of a white man (John), and a black man (Glen). In each case, the subject went shopping in a store, visited a car lot, and had direct interactions with the police. The discrimination experienced by Glen was clear. This is just one of many empathy examples that will help you understand it in real life.

The participants were asked to either:

All of them were later tested, and the participants in the first two groups showed less bias than those who were asked to remain objective. Moreover, the result was true regardless of which of the first two groups they initially fell into. The only thing that was important was that they were asked to practice affective empathy by endeavoring to identify with the experiences of Glen.

In a second study, researchers showed a picture of an African-American man to a group of college students. They were asked to imagine a day in his life, and to take one of three perspectives:

When they’d finished writing, they were interviewed by an African-American woman. She wasn’t told anything about the choices, or instructions given to the students beforehand. She simply took the students into another room and had an individual conversation with each of them. She was then asked to gauge the quality of her interaction with each participant, and talk about whether her experience could be described as an example of positive empathy.

The results confirmed what the researches had originally determined in the first experiment. The interviewer perceived that her conversations were more positive with students who’d chosen to practice affective empathy. If they’d taken the perspective of the African-American man, they demonstrated a comparatively decreased bias, and modeled more open body language. If they’d chosen a more objective viewpoint, the opposite was true.

The conclusion that we can draw from this set of experiments is that empathy can be taught. All that is necessary is for a participator to be instructed to put themselves into the shoes of someone else. The act of doing this yields concrete social benefits, and will affect their interactions with others for the rest of their lives.

Perhaps the most famous example of an experiment in this context is Jane Elliot’s Blue eyes vs Brown eyes exercise. In this experiment, the researcher segregates groups of people based upon previously unimportant characteristics. Often, the divisions are based upon eye or hair color. People in one group are made to feel superior, while people in the other group are made to feel inferior. The outcome of this particular exercise is always profound, and leaves an indelible mark on the participants. You can view a video of this experiment in action here.

Empathetic listening is defined as a method via which you can prevent or manage disruptive or assaultive behaviors. There are some easy ways you can improve your skill in this area, and we’re going to list out a few below.

To sum up those skills, you want to be present, reserve judgments, listen attentively, observe physical indicators of emotion, listen patiently, be quiet, and make efforts to communicate the fact that you are interested an engaged in the conversation at hand.

We hope you’ve enjoyed our discussion on the topics at hand, and have given you pause when considering the importance of empathy in your own lives. Take heart in that fact that you can indeed improve your empathetic response if you so choose. All that is needed is for you to put yourself in the other person’s shoes. Let’s try to remember this the next time we find ourselves in an argument, or heated exchange. What are they really trying to say, what are the effects of our hasty words on the outcome of the conversation? What can we do to improve our empathetic listening skills, and how can we model great examples of empathy to our children? Keep these questions at the forefront of your mind when interacting with others and you are sure to see the benefits.