Social Intelligence: The Key to Career and Life Success? Skip to content 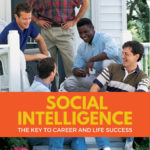 Social intelligence is a theory that has plagued psychologists since the 1920s. It was originally described by Edward Thorndike as “the ability to understand and manage men and women, boys and girls, to act wisely in human relations.” Is the improvement of social intelligence the key to success and happiness in your life and career?

What is Social Intelligence?

Social intelligence is, put simply, the ability to get along with others. These relationships are integral parts of our everyday life, whether they are personal or professional. Your social skills determine how people react to you, how they think about you when you are both present and absent, and how willing they are to work with you.

Think back to the last time you were at a party or in a crowd of people. It’s in situations like that where it is easiest to find people with high levels of these skills. They’re the people who are the center of attention, or those who can flit from group to group and talk to people effectively without feeling apprehensive or self-conscience. They understand what makes people tick, and are very skilled at reading people.

This type of people-centric intelligence is actually part of a theory put forward by Howard Gardner, a professor at Harvard. He theorized that human intelligence was broken up into a variety of that could not be defined by a single IQ test. These include practical, emotional, abstract, kinesthetic, and of course social intelligence. Most people combine traits from each of these, but some do lean strongly toward one or two specific types of intelligence.

How to Improve your Social Skills

Like any other form of intelligence, there are plenty of ways to improve your social skills.

Improve your Skills through Games and Activities

Now that you have a better idea of what you need to do to improve your social skills, here are some games and activities that are designed to do just that.

Eye contact is an important part of improving your social skills, but it is the one thing that many people neglect. The easiest way to learn the confidence to make eye contact is to find a good friend or someone that you are comfortable with and have a staring contest! Not only does this appeal to the competitive streak in each of us, but it also makes you more comfortable with the concept of staring someone in the eye as you speak to them.

Reading body language and facial expressions can make improving your social skills much easier. It gives you the ability to determine the mood of the people that you are talking to.

Believe it or not, you can learn some of these skills by watching TV. Actors are skilled in portraying their characters not only through the lines that they speak but through the expressions on their face and the way they hold their bodies. These professionals can speak volumes by shifting an eyebrow or changing the way they cross their arms.

Other activities that you can use to improve this particular part of your social skills include:

Communication is the key to strong and balanced social skills. It’s hard to be social if you can’t express your opinion or talk to anyone. Here are a few activities that you can use to improve your communication skills.

Play up the small talk! – Make it a point to start a conversation with one stranger no matter where you go. If you’re in line at the store, talk about the weather. If you’re sitting at the DMV, commiserate about the insane amount of time that you all spend there. Once you start making it a habit, it will get easier and easier.

Step out of your comfort zone – It’s tempting just to stay home and avoid social situations if your skills are lacking. Instead of staying safe, get out of your shell! Head out to a bar with friends, or find a party and get yourself invited. Act the part, even if inside you’re scared out of your mind. If you act confident, they’ll never know you’re terrified.

Start a neighborhood project – This is more difficult thanks to the current tendency of people to avoid their neighbors wherever humanly possible. Find a cause or a project, and do everything you can to get your neighborhood involved. This could be something as simple as turning an abandoned lot into a community garden. When people come together to work on a project, they tend to get closer and become more social. Who knows, maybe you’ll start a trend!

Social intelligence can be difficult to learn if you don’t already have the inherent skills. These skills, though, are ones that should be sought no matter the difficulty, because a high level of social intelligence is indeed the key to a happy, successful, and productive life.